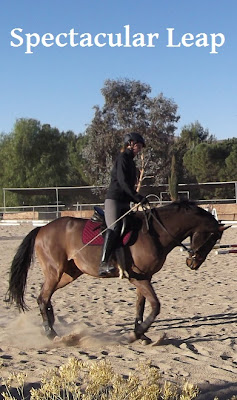 OK, I don't know much about horses or dressage at all, but I was blown away by this horse I saw my sister ride last Saturday. Not only is Spectacular Leap a beautiful horse, but he does what the rider tells him to without fussing, and he carries himself well, if that doesn't sound too stupid.

See how the top of the photo is in focus and clear, yet the horse's feet are blurry? That was how it looked with my naked eye, too. It's like the horse has a Cadillac suspension system. There is a video, if you scroll down the page. Watch it and see this movement. The horse is trotting! When I was a kid, my mom and my sister dragged me along when they went trail riding, and I always hated it when my horse trotted. It was like riding a bike with wooden wheels on a cobblestone road. Yuck! But this horse makes it look almost comfortable. I marveled at that.

Owner Carole Francis-Swayze says Spectacular Leap is descended from a famous race horse named Spectacular Bid. She offered to show me the pedigree, but I took her word for it. She says her horse is a thoroughbred, but that his build harkens back to the Arabian origins of the breed. He is a 16-year-old gelding. I said her horse reminds me of my dog, Raffle, who is so eager to please us that he does everything we say and many things we don't say but that we want him to do. She agrees and says horse people call that having a good mind.

That's my sister riding Spectacular Leap, both in this photo and in the video. She says horseback riding is very strenuous exercise because a rider has a moving being underneath and has to anticipate its every move. After discussion, she thought maybe surfing in the ocean on a surf board might be as strenuous.