Update: Dog Aliens 1 is now available wherever you buy books online. It has a new cover, but here I am holding my very first paperback novel. :) 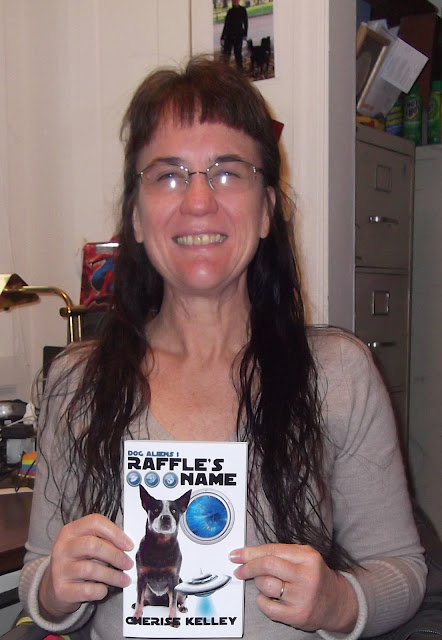 Turkey in Fridge Intimidates Me

Scott's employer gave everyone a turkey for Thanksgiving! Instead of being grateful and delighted, I'm intimidated. This will be my 18th Thanksgiving as a married woman, and only my 2nd time cooking a turkey. The first time was our first Thanksgiving. It didn't go very well.

Three things went wrong, our first thanksgiving as man and wife. I will tell the worst thing last.

First, I hadn't realized that a turkey needs several days to thaw. Here it was, Thanksgiving morning, and my turkey was still frozen. Well, I used the old trick of running hot water over it in the sink, and it thawed out in less than an hour. One problem rolls off my back.

Second, cooking a turkey dinner is a big job! I made four pies, as well, and I plan to do so again this year. Again, it will be just the two of us, so I don't have the added pressure of performing for company, but still. I started preparing meals when I was 10, but usually that means heating a frozen or canned dinner. Most of us modern women don't normally cook turkeys. I'm grateful to my sister-in-law for telling me about turkey loaf after that first Thanksgiving. That is so much easier! But, this year we were given a turkey, and money is tight, so I'm going to cook it.

Third, right after I served the first turkey I ever cooked, my husband broke bad news to me: the next morning he would be going out to sea. He was in the US Navy, so that was always a possibility, but what lousy timing. I was going to be eating all these leftovers by myself. We cried so hard then that we couldn't even eat what was on our plates. Thank you, Mom, for recommending I just freeze it all for when he got home.

So, there you have it. The turkey in my fridge intimidates me, and now you know why. I got Scott to help me choose a stuffing recipe from The Joy of Cooking. We're going to make apple and onion dressing, minus the raisins. I'm making two pumpkin pies and one apple pie. Only the turkey and stuffing will be from scratch. I bought canned pumpkin and canned apple pie filling. I make my own crust, but I press it rather than rolling it. It's pretty easy. I use instant mash potatoes. I know how to make gravy, and I am going to try, but I have cream of chicken soup on hand, just in case the gravy doesn't work out. Happy Thanksgiving to everyone!

Email ThisBlogThis!Share to TwitterShare to FacebookShare to Pinterest
Labels: turkey in my fridge intimidates me

Go Go Boots and Oreo the Black and White Dog 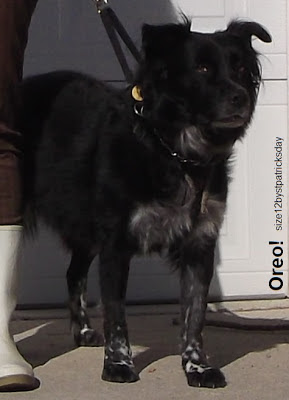 I have to admit: I was going to be the star of this photo. I thought I looked so cute in this retro 1960s outfit, complete with shrimp boots that resemble the go go boots I used to wear to elementary school. But I have been upstaged by my black and white dog, Oreo!

How cute is this picture of Oreo! It characterizes him perfectly, capturing the smug look his eyes get when he thinks we aren't looking.

Like our other dog, Raffle, Oreo is a mutt we rescued from the pound. Near as we can tell, he is part Springer Spaniel and part Border Collie. His strongest trait is the hunting instinct.
-----------------------
I lost 1.8 pounds yesterday, and am once again within my goal weight of 145 to 149.9 pounds. I substitute taught yesterday, which means I was on my feet most of the day. Additionally, I walked Oreo half a mile in the park. Here is what I ate yesterday: Special K and organic soy milk, raw baby carrots with two tablespoons Parmesan spinach dip, 1 Trident Alaskan Salmon Burger off the bun with Robert Rothschild's Habanero sauce, mixed Chinese vegetables stir-fried in the oil from the salmon burger.
----------------------

I love the beautiful fall leaves! This is me out in them with Raffle and Oreo, about two weeks ago. It was sunnier and warmer then. Now, I wear my snow coat whenever I go out; it's that chilly and windy out. The sky isn't blue anymore, either. It's once again cloudy every day. Believe it or not, I actually prefer the clouds. I had the sun in my eyes for 45 years down in California.

I just adore this huge maple tree that I pass under every time we go on our walk in the park. No one lives here right now, and so none of the leaves have been raked. They are two feet deep in places! This is the spot where I first realized it was too autumn here in Spokane as early as August, when the leaves started crunching under our feet.

Most of the trees here in Spokane are evergreen pines, but we do have a smattering of Maples and other picturesque deciduous trees that people have planted in their yards and in parks. Even the pines get a bit brown in early fall, though, because we don't get rain all summer. There are pine needles all over the ground, mixed in with the fallen Maple leaves. It is quite pretty on the green grass.
-----------------
My weight got up as high as 152 yesterday, because of all the Halloween candy I ate on October 31 and November 1. I also awoke with a migraine Nov 2, and I blame all that sugar. I have learned my lesson: I can indulge for one day, but I get a migraine if I stretch it to two days, as well as terrible weight gain. I lost 2.4 pounds yesterday, though. I was in bed all day with a migraine, so I didn't get any exercise. Here is what I ate: