Window Is Short for Wind Opening 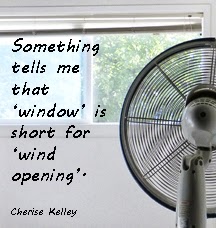 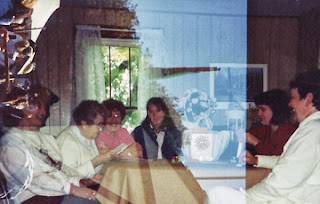 I imagine people shortened 'wind opening' to 'window' long before they had electric fans to help the wind cool their houses. I wonder when we lost track of why we called them wind openings, but I'd guess it happened fairly recently, with the invention of air conditioning.

That reminds me of a cool story about my family's old farmhouse. My Grandma Anna, second from the left in this photo that was taken in the late 1980s, grew up in tornado country. Her father built this farmhouse in the thick of tornado country. During tornado warnings, she would tell us to open the particular window that appears in this photo. She said that giving the wind this opening would prevent the tornado from tearing the house down.

Unfortunately, this photograph got double exposed. That used to happen sometimes, back when we needed to use film in order to take pictures. I mistook this roll of film for an unexposed roll, and I took another picture on top of this one.

-----------------
In other news, I weighed in at 156.6 this morning, and I will be dieting for the next week or so. The cheesecake our church gave us to celebrate our 19th wedding anniversary sure was yummy, though!
Posted by Cherise Kelley