Today I have a guest post for you from my friend PA Woodburn. She is 69 years old, and wanted to share with you how she lost 50 pounds this year!
-------------------------------
When I was in my forties, my work sponsored a weight management class. Many State workers volunteered, myself included. The encouragement and competition were excellent. I shed 87 pounds, dropping from a size 18 to a size 4. Plus, I became super fit. The medics returned a year later to test how much fitness we had retained. I kept my good shape and weight for at least five years. I remember going into a store and asking the salesperson in a whisper,”Excuse me for sounding stupid, but what size is smaller than small?” 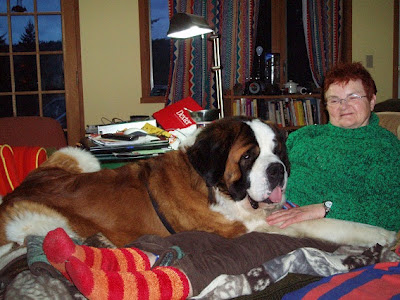 At 68, I’d retired and put it all back and then some. I felt old. When I went to my care-giving job for a mere four hours I’d come home with an aching back, painful right hip, and heels on fire. I knew this was my last chance. I had to take action, or I would sink into a crippling old age very fast. It would be a lot harder than the last time because of body aches and a much slower metabolic rate. I simply dreaded having to exercise for hours every week to lose a few pounds. I was 240 pounds, and a surgeon told me that if I lost 20 pounds I could delay hip-replacement surgery. My sleep apnea doctor told me if I lost 50 pounds I could probably discard my CPAP machine, which I really hated. Still, I was very resistant to dieting. I knew the effort I’d put in before and simply didn’t wish to repeat it. I’d recently published a novel and was more interested in promoting it than exercising for 2 to 4 hours a day. My success the first time resulted from an obsession with dieting. Been there, done that.

We have a Saint Bernard, Zeno, who can’t be left at home alone because of very severe separation anxiety. He broke a tooth biting through a door knob and then another. After $6,000 of doggy dental bills, I quit care-giving.

One day, I saw President Clinton being interviewed by Dr Gupta on CNN. He looked very slim and healthy. President Clinton explained that he’d gone on a plant-based diet and felt that it had saved his life. They mentioned a book, Prevent and Reverse Heart Disease: The Revolutionary, Scientifically Proven, Nutrition-Based Cure by Caldwell B Esselstyn, Jr., M.D. I purchased the book that afternoon feeling like a dork, because I never emulate celebrities of any kind. But, Clinton sure looked good. It was a no-oil vegan diet. Deciding to try it no matter what, I bought a good supply of the recommended food. I wouldn’t exercise until I’d lost some weight, and I wouldn’t restrict calories. I had been a vegetarian for over twenty years, but as vegan a would have to sacrifice milk, eggs, and cheese. Could I survive without ice cream? Packing up my brand new ice cream maker, I ordered The New McDougall Cookbook: 300 Delicious Ultra-Low-Fat Recipes by John A McDougall M.D., and Mary McDougall online. 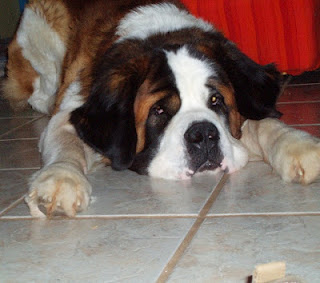 Our Saint Bernard has very bad front elbows. We decided to do arthroscopic surgery followed by stem cell injections. I mention this because Zeno had to be kept still for six weeks. The veterinarian wanted him kept in a crate. I didn’t want more broken teeth. We piled up all the furniture and fenced him in. I couldn’t move much either because he would get up if I did. We wanted this very expensive and painful procedure to work. I started the diet when he had the surgery. In spite of my lack of motion, I steadily lost weight. Not huge amounts, like they do on TV in “The Biggest Loser,” but every week I’d lost some. Best of all I didn’t have any of the cravings and deprived feelings I usually get when dieting. I’d eat huge amounts of vegetables, fruit and only recommended carbohydrates with some beans and soy for protein. I had a few problems with my Warfarin because people on blood thinner are advised not to eat many vegetables. My blood had to be checked more frequently.

It’s a year later. I haven’t broken the diet once. I’ve lost fifty pounds, and I’m now a size 14 going on size 12. No back, heel, or hip problems for months. I’ve discarded my CPAP machine. My blood pressure has dropped from 112/70 to 92/56. My body mass index has dropped by 8.58. I have a waist. I haven’t exercised consistently, partly due to laziness and partly due to Zeno’s restrictions. He’ll never be able to go for long walks like a normal dog. I need to lose another 50 pounds. There’s still some flab. I’ll stay on this diet forever. I kept all my size 4 clothes, so if I get that thin again I won’t lack a wardrobe. Maybe I won’t hit 4, because I’ll be 70 on my next birthday, but I may have added some good years to my life. 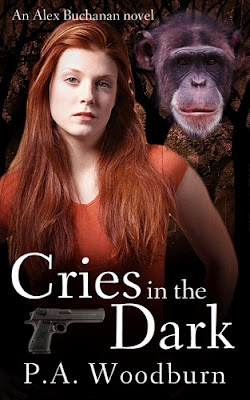 The best thing about this diet is the lack of cravings or hunger. Frozen bananas blended with frozen veggies and fruit are a lot like ice cream. The worst thing is eating out. I usually eat a meal before I head off anywhere I’m going to be confronted with food.

Now that I can squeeze into a swimsuit, we’ve decided to move to Southern California as soon as we can sell our house in Washington state. I can’t wait to hit those California beaches. Don’t know if I’ll be bikini material, but we’ll see.

I’m now working on my second novel. I’m hoping it will be published before Christmas.

My first book, Cries in the Dark, is an animal-rights mystery thriller: Alex Buchanan finds that she can telepathically communicate with animals. On her first day in an American Sign Language lab for chimpanzees, her friend is killed. Several other people, including Alex’s boyfriend, are murdered or just disappear. Some lab chimps are sold to a vivisection research facility. Certain that she is being stalked by a serial killer, Alex has to find a way to help the remaining chimps. She must track down and confront the killer before becoming the next victim.
----------------------------------
This is Cherise again. Isn't PA Woodburn's story inspirational!

I gained .8 pounds yesterday and am .3 pounds over my goal weight range of 145 to 149.9 pounds. I walked five laps around the park, so almost 2 miles. I ate and ate and ate, though. We finally gave in and turned the heater on last night. I think that will help stem my cravings from here on out. Here is what I ate yesterday: