Any Irish man or woman will tell you that there were Faeries in Ireland once, but long ago, they left. The year 1848 is often cited, as it represented the depths of the Potato Famine. The Faeries -- most of them -- actually sailed away in 1850, crossing the Atlantic in a pair of clipper ships, under the protection of two Scottish brothers and sea captains. An enterprising Part-Faerie man named Solomon Murphy had found unsettled lands for them in the quarry hills above Atlanta. They remain there to this day, living under a great Concealment. The Human world believes their home to be a private nature preserve. Their greatest challenge is to raise enough food for themselves without changing the appearance of their woodland home. Aside from a tiny farm patch on the edge, the Georgia Faerie Circle Lands must appear to be uninhabited old growth forest. Furthermore, it is not the Faerie way to harm or drive off the animals that share the Lands, so they must be provided for, too.

Faeries are only three to four-and-a-half feet tall, but they have wings and fly, so a typical Faerie consumes more calories than a Human should. They eat no meat, nor do they use the skins of animals for clothing. (The Faeries never kill, for to do so would break their Covenant with God and abolish their Powers.) When they arrived in Georgia, they knew very little about the native foods. Luckily, their new Lands were not completely uninhabited. There were Cherokee Indians who had hidden from the mass removal known as the Trail of Tears, a a few escaped slaves. They taught the Faeries which foods may be gathered in Georgia.

For over 160 years, the Faeries have practiced their unique agriculture, which supports them as long as they are diligent and careful. Every tree that falls is replaced with a sapling fruit or nut tree. They grow squash and gourds in the sunny clearings, and plant berry bushes on the hillsides. On the hilltops, they graze sheep and goats, for their milk and hair. They clear away other vines, so that the grapes have room to grow. Last, but not least, even the ferns are edible. (It helps that their Power with Animals enables them to tell the goats and deer exactly where to eat. They do most of the weeding.)

The Faeries rarely build fires in the daytime, to avoid Humans seeing smoke over their Lands. Fortunately, they are nocturnal by nature, so they do most of their cooking by night. The caves that dot their Lands are close to the surface, and have little hidden chimneys built in. When they have to build large fires on the surface, they stretch a woolen canvas between the trees to hide the flames. They preserve much of their food for Winter by smoking or drying it.

Here is a typical Faerie Autumn meal, adapted to our cooking methods: 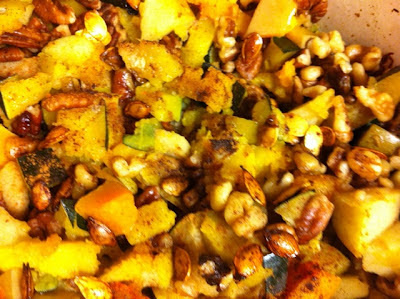 Preheat your oven to 400 degrees. In a glass or ceramic bowl, combine the squash with a very small amount of oil. (The Faeries have to make oil by pressing nuts, so they hardly have any at all, and are very frugal with what they do have.) Bake covered for thirty minutes. Uncover and add the apple, peach and raisons. Sprinkle with the ginger and cinnamon.  Bake until the squash is tender.

In the meantime, gently brown the pecans, walnuts and squash seeds in a flat pan on top of your stove. When the squash comes out of the oven, garnish it with the nuts and seeds. Drizzle on a small amount of honey.

Notes: The Faeries cut up their food with brass knives, because iron is poisonous to them. The Faeries gather the bark of the wild cinnamon plant and carefully preserve it, because wild cinnamon needs a long hot summer to grow in North Georgia, and is not always available. You can use regular store-bought cinnamon. The Faeries have a few beehives, but they are as careful with their honey supply as they are with oil.
You can dry apples and peaches in a 200 degree oven on a baking sheet.

You can sample Terra Luna for free by clicking that link and then clicking on the book cover to "look inside" the book. Update Dec 14, 2012: I have now read Terra Luna. It's a really fun story, and I do recommend it.

I have lost .8 pounds since my last post on Saturday. Sorry for not posting more often, but I was busy substitute teaching yesterday. I am also really busy writing Dog Aliens 1 Raffle's Name so that I can get it published soon. I have decided to only post to this blog when I have something to say. I do still keep track of my daily weight and food intake. I know I will have to do this the rest of my life. It is the price of keeping the weight off.
Posted by Cherise Kelley