Forks Rainforest Bathroom on the Drive from Port Angeles 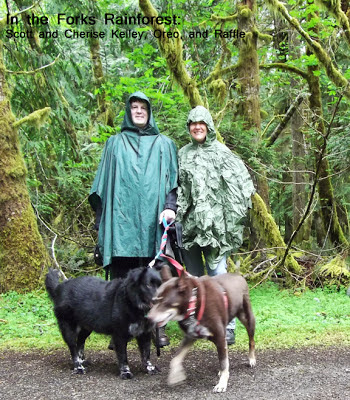 On the hour drive from Port Angeles to Forks during our vacation, we needed the restroom. We stopped at the Storm King Ranger Station and discovered they have not only a clean and dry indoor bathroom, but also an easy walking trail through the Forks rainforest, called the Moments in Time Trail.

Dogs are allowed only on the part of the trail that goes through the ranger station area. The rest of the trail is a mile-long loop that goes past some cabins the State of Washington rents out. A branch of the trail goes off to Marymere Falls, too. We tried to find the falls, but we got too antsy with the dogs waiting for us in the car.

We saw three deer during the hour we were on this trail. I petted one of these fuzzy mossy trees. It felt soft! It was May and there were little blue flowered meadows everywhere, just like Edward and Bella's meadow.

It was a school day, and some kids from one of the local middle schools were there with some teachers. One of the kids said about us, "Cool! You guys are in camouflage!" We just let them think we were cool. In reality, we are not used to the constant rain, but having lived in Forks before, we knew we'd better come prepared for rain.

I'm back up to 159 today. I know! Scott wanted this yummy salmon dip at Costco the other day, so we indulged last night. It is likely two pounds of water gain from the salty salmon. We'll see.

We went on this trip to see how Twilight has changed Forks. I will be posting more about this in the days and weeks ahead!
Posted by Cherise Kelley

Email ThisBlogThis!Share to TwitterShare to FacebookShare to Pinterest
Labels: bathroom on the drive to Forks from Port Angeles, Forks rainforest, Twilight has changed Forks