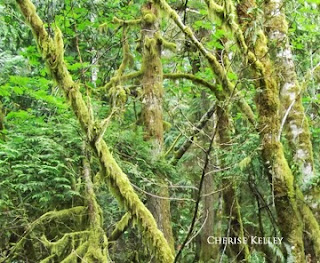 I have heard rumors that Lions Gate Entertainment Inc plans to remake the Twilight movies. I hope they remake them in Forks. I don't think Twilight 2008 director Catherine Hardwicke realized the Forks forest is a creepy and cool mossy rainforest, not just a regular pine forest. The town of Forks has been accommodating to Twilight fans and deserves the recognition and increased business that filming on location there would bring.

Exercise comes easiest when it's fun. Scott, Raffle, Oreo, and I had so much fun traipsing through the creepy and cool rainforest! Moss does not only grow on the north side of trees, just so you know.

We saw several deer here at the Storm King Ranger Station on the drive from Port Angeles to Forks. The deer are all so tame, they didn't even run when our dogs barked at them! This is unheard of in most of Washington, where deer hunting is a popular sport. I know because we have lived in Spokane two and a half years now.


But just in general, we were really captivated by how eery and silent the Forks forest is. It is so green and alive because of all the rain it gets. I remember when we lived in Forks back in 96, one day it rained 6 inches. It rained at least half an inch every day, most heavily at about 4 pm. We had to mow our grass twice a week.

We called this one that Scott, Raffle, and Oreo are under "the tepee tree." 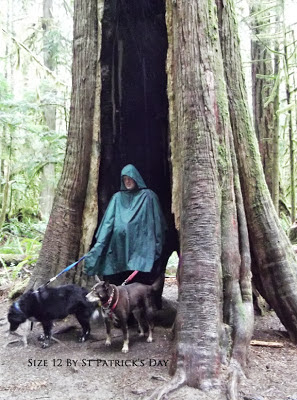 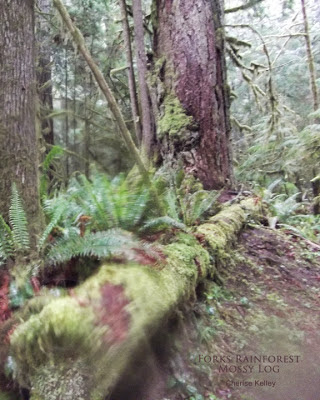 I finally cracked under 158 today! I weighed in this morning at 157.4, which means yesterday I lost .8 pounds. I didn't expect that because I gave in and had a slice of pizza for lunch yesterday.

I don't think I am a city girl anymore, though. I wouldn't want to deal with the rain in the Forks forest, but I love living close enough to nature that I can walk in the Spokane forest every day, or at least in the woodsy park, if not up in the forested hills.
Posted by Cherise Kelley