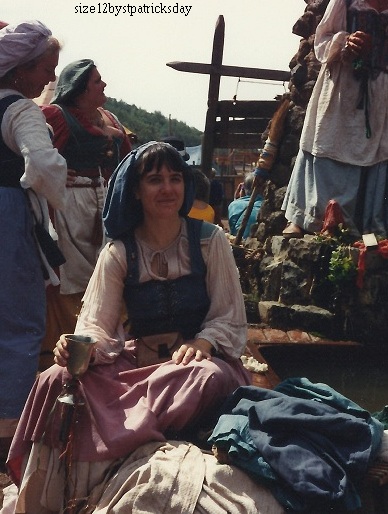 My favorite improv ever at California's  Renaissance Pleasure Faire was when I borrowed Wrong Way's black scholar hat and raised my chin at the puritans.

"Look who's educated now!" they said.

"Where is the university who would admit you? In deepest Africa?"

"Is it in Bulgaria?"

"What university could be in all those places?" they sneered at me (the puritans were the villains at Faire).

"It is the university of the washing well! It is in every country and every town throughout the world, and it is educating women!" I told them proudly.

The puritan men proceeded to quiz against my worldly knowledge (of which my 16th century peasant character had little), but the puritan women actors had all been washerwomen before they auditioned to be puritans.

"Those aren't questions; those are quizes," they said in my defense. "A real question would be 'What gets blood stains out of your Sunday best dress?'" (Cold water.)

I loved this improv for two reasons:

1) We emphasized women's "washing well wisdom." Up until 200 years ago or so, women simply were not sent to formal places of education. We were not stupid, we simply were uneducated. It always bothered me when I was young and adults implied I was dimwitted because I didn't remember when Eisenhower was President. As a teacher, I try to always remember the difference between knowledge and intelligence. My students might be ignorant of facts, but they are not stupid.

2)  Gerald Zepeda prepared the puritans and Julie St Germaine prepared the washerwomen excellently for encounters such as this. No one said, "No." Instead, we all said, "Yes, and..." That is the number one rule of improvisational acting, and it is so much fun when everyone follows it! Thank you, Gerald and Julie, for some of the best years of my life.
----------------------
I blew my diet big time yesterday and gained 2 pounds. I substitute taught English and was on my feet all day. I also walked Oreo 1.3 miles after I got home. Here is what I ate: