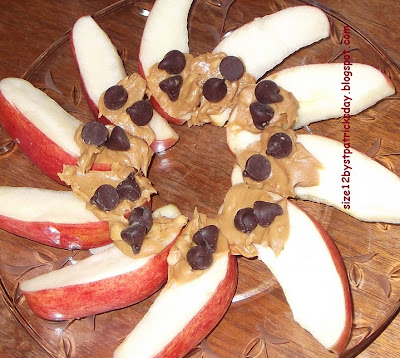 We walked the dogs two miles in the park. Here is what I ate:

Celeste supreme pizza for one


I have more to say, but I will have to add it later as I got a late call to substitute teach today.

Added later:
Peanut butter has 180 calories per 2 tablespoon serving, so go light on it. It is healthy though in the sense that it is loaded with 7 grams of protein for those two tablespoons. This has become my favorite snack! I go through 10 apples every 4 days or so. Fuji apples are the best, in my opinion. My Wal-mart has big Fuji apples and sells them for 85 cents a pound.
Posted by Cherise Kelley

Email ThisBlogThis!Share to TwitterShare to FacebookShare to Pinterest
Labels: apple and peanut butter, Recipes for Diet and Keep Trim