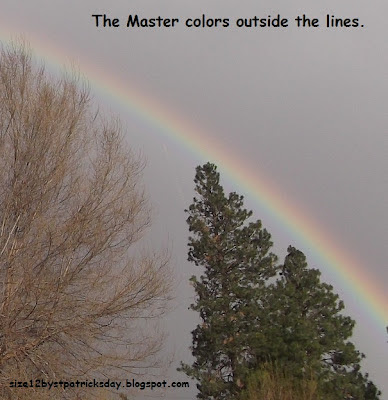 This is the brightest rainbow I have ever seen! I took this picture April 18, 2012 at about 6:45 pm in Spokane Valley, WA. The rainbow was visible for just a minute while it was pouring rain. The next thing I knew, the sun was out. The sky was blue and the rain abruptly stopped -- and the rainbow disappeared. It was actually a double rainbow when I first saw it, but by the time I got my camera out I only caught one bright single rainbow.

I was intrigued by how the rainbow seemed to encircle the trees to the right, and so I made the edits and wrote the caption in the top photo. Aside from resizing, cropping and adding the captions, I did not Photoshop these photos at all. The rainbow was that bright. 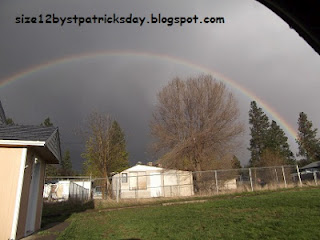 We walked all over Costco yesterday and then walked the dogs half a mile. Here is what I ate:

I enjoyed every bite, but today I am taking it easy and getting back down to 145. This focus is part of my permanent lifestyle change from a size 20 woman to a size 8 woman.

We ate the popcorn at a friend's house while we watched a documentary video called "The Privileged Planet." What blew me away in the video was when they explained that the sun and the moon have to be precisely proportioned and distanced so that the moon can perfectly eclipse the sun.
Posted by Cherise Kelley