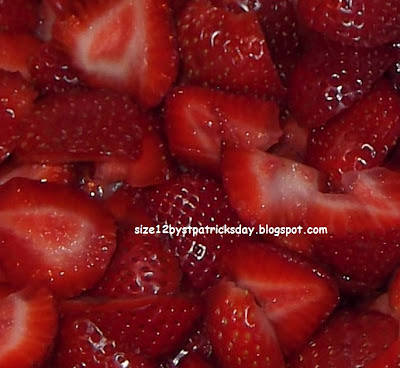 My weight: 197 I'm on keep trim eating for these two weeks. OK, I came really close to a zero weight gain day, just gained .2 pounds yesterday. If we had gone on our walk, it would probably have been a 0 gain day. We had a family movie day yesterday, and didn't feel like answering the phone, let alone leaving on a walk. Today I am going on a walk even if Scott doesn't feel like going. I need to get to the zero gain day!

I started out the day as usual, with 1 cup of Special K, 1 cup of soy milk and well, OK, a whole cup of cut-up strawberries -- and three cups of coffee, black and unsweetened.

We are trying out two new churches, going to each every other week. Yesterday we went to that church that has the donuts out when you get there. I was good for the first hour; I just had two bites of my husband's maple bar. But during the social time after the service I got coffee and caught a whiff of the remaining donuts. I cut a glazed donut into 4 pieces, and ate two of them over the next half hour. So, all told, I had about 3/4 of a glazed donut. As I said, though, this could have still been a zero gain day if I had gotten my normal amount of exercise.

Having learned from yesterday that two corn dogs were too many, I just had one corn dog for lunch, along with a cup of raw carrot sticks and two cans of Diet Coke.

Dinner was a broiled cheeseburger on the bun with 1 tablespoon of BBQ sauce, a cup of steamed broccoli, and 20 ounces of Walmart Strawberry Lemonade.
Posted by Cherise Kelley