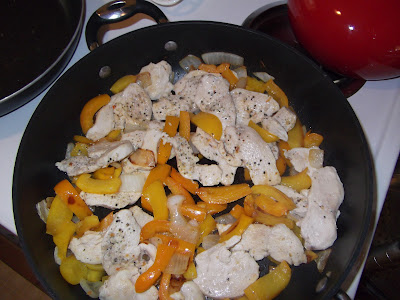 Weight: Still 200. I did not lose my pound yesterday. Just keeping the weight off is not enough right now. :( Looking back on what I ate in the past and still lost my pound, I guess the dinner I had yesterday has to be just for keep trim eating, and not for the two-week stretches that I am trying to lose a pound a day. [Edited to add: At this point, I was using a mechanical scale that only registered a pound or more of weight loss.]

I would love to stay in ketosis longer than two weeks at a time and lose the weight more quickly, but Dr. Tarnower tells us several times in his book not to do this, and so I don't. I have recently done some research online about ketosis. From what I have read, it is dangerous for the liver if you stay in that metabolic state too long. Interestingly, I also read that low carbohydrate diets were the primary treatment for diabetes throughout the 19th century. They avoid the diabetic state, rather than trying to manage the diabetic state.

Scarsdale is a low-fat diet, in addition to being a low-carb diet. It does allow carbohydrates from fruit and encourages us to eat lots of vegetables, especially leafy green vegetables, so I think Scarsdale is much healthier than other low-carb diets that are high in fat.

My dinner, which I think is what disallowed me to lose my pound yesterday, is one of my favorite recipes that I made up: low carb fajitas. As I said earlier, I guess I have to reserve this for my keep-trim eating weeks and not use it during weeks when I am trying to lose my pound a day.