Keep Trim with Exercise for the Win! 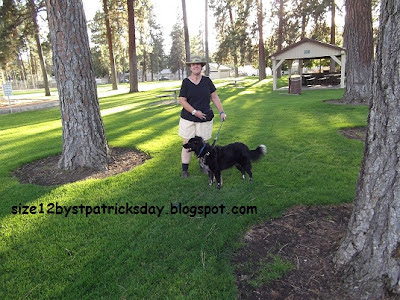 My weight: 196! I lost a pound yesterday, and it was mostly because I walked a mile and a third. I must have lost that extra pound I gained the two days right before yesterday because I was not exercising enough. Thank you, Mom, for encouraging me to lose as much weight as I can while I am young and can still exercise. I can see where this would be nearly impossible for the handicapped.

When I go on my walks, I take my dog. He keeps me moving at a fast pace. He also gives my arms a workout because he pulls on them in his excitement to be 50 feet ahead of where we are. We walk the whole mile without stopping for longer than it takes him to relieve himself -- 10 or 20 times. Scott and I bought rain coats and snow coats and waterproof boots, so we can go on our walk no matter what the weather looks like.

We usually walk in the park that is a block from where we live. It is a large park and three times around its perimeter is a mile. The park is fenced and grassy. It is open from sunrise until 10 pm. I have no idea why I look like I am making gang signs in this picture. I'm not. Honest. But see how nice our local park is?

OK, here is what I ate yesterday that got burned off and then some by walking four times around our park, or a mile and a third - and lost a pound:

Thank you for asking me yesterday about if I am counting calories. I'm not. The Scarsdale Medical Diet is about food groups and portion control, rather than calorie counting. I have been using it off and on since 1979, but obviously not as often as I should. I have learned over the years that it is mostly a matter of eating lean protein sources and vegetables, with a little fruit thrown in, during the weight loss periods. During the keep trim periods I can add a little bit of pasta and bread, but not much at all. Dr Tarnower explicitly says to avoid juices and all sugary drinks at all times. He suggests that we satisfy our sweet tooth with diet soda. I am confident he would still be around today if he hadn't been murdered in the early 1980s.

Email ThisBlogThis!Share to TwitterShare to FacebookShare to Pinterest
Labels: can still exercise, lost a pound, lost weight on keep trim