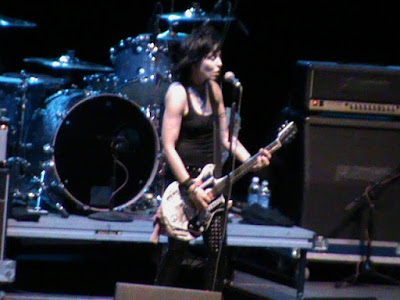 My Weight: 197 I lost 2 pounds yesterday rocking out at the "Joan Jett and the Blackhearts" concert. I know Joan is older than me. She was already out of school and touring in 1979 when I was in high school and snuck in as 21 to see her perform at Madam Wong's West. She was more animated last night than she was back then! She jumped around so much this was the only clear picture out of the 240 I shot.

Joan Jett's music was too adult for this family crowd of 6,000 at the Spokane County Fair 9/15/2011, but they were dancing in the aisles. She knows how to rock. She inspired me. If she can be 50+ and this active and looking this fantastic, then I can, too! On Joan Jett's Facebook page, I asked her how she stays so trim and gorgeous. I really wonder about Joan Jett's diet and what exercise she gets besides being an animal in her concert appearances. I'm not holding my breath for an answer, though, heh!

Joan Jett mentioned K-Stew last night. Joan asked the crowd how many of us had seen the movie about Joan's first band, The Runaways. Almost half the crowd cheered. Joan then said, "Then you heard Kristen sing my song!" So, Kristen Stewart sang at least one of those songs herself; I heard it from Joan Jett's mouth.

What impresses me most is how much Joan Jett's figure resembles Kristen Stewart's, even though Joan Jett is at least 30 years older. Joan's voice also sounded just like it did 30 years ago. She looks and sounds like she resisted drugs and smoking. Rock on, Joan Jett!