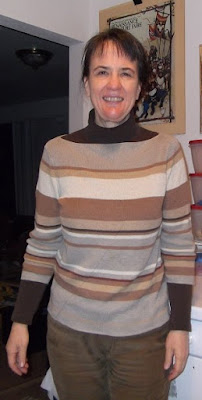 I ate a little bit of dessert at all three meals yesterday and still lost .6 pounds. We walked to church because the roads were icy and it was only a mile. Some nice folks insisted on giving us a ride home, and so I had time to motor over to our other church and attend a baby shower.

The first church always has donuts out, and I walked there so I felt I had earned a maple bar. There were cupcakes at the baby shower. I resisted until the very end when a well-meaning lady asked didn't I get any of the treats and brought me one for myself and one to take home to Scott. Mine was yellow with lemon filling. Scott's was chocolate with raspberry filling.

In the late afternoon we walked the dogs another half mile in the ice and snow. After dinner, Scott gave me the raspberry filling portion of his cupcake. He didn't like the filling.

Here is everything I ate yesterday and still lost .6 pounds:

If you told me a year ago I could eat like this and still lose weight I would not have believed you!
Posted by Cherise Kelley