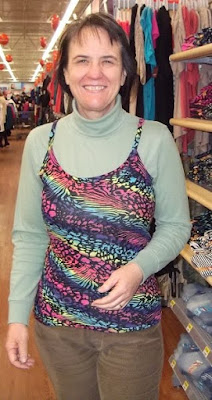 I subbed yesterday. One of the lunch ladies offered me a free hot ham sandwich after I had already eaten my carrots and Parmesan dip. It sounded so good that I accepted. I had 5 minutes left and I gobbled most of it down. This morning after my ham sandwich indulgence, I was pleasantly surprised to see that I had lost a whole pound!

My guess is that consecutive diet days cause a weight loss plateau. I am going to try alternating diet days with keep trim eating days, and see if that speeds up my weight loss. I only have 7.6 more pounds to lose!

Here I am wearing a tank top from the juniors department, juniors size large. We were shopping last night for new tire chains. Ours are rusted. We bought the type we wanted and tried them on our truck in the parking lot, but they didn't fit. Meanwhile, the sun had set and it had gotten very cold outside.

In all, I think we walked more than a mile, in the parking lot and inside Wal-mart. We took this picture toward the beginning of our trip, while we were still smiling, heh!

Scott tried again to talk me into stopping at my current weight. "You are skinny enough already," he told me. I think he might be worried that I have anorexia. I promised him I will stop losing weight when I reach my goal of 145. I calmly explained that I am aiming for a body mass index of 22, which is supposed to be the healthiest. He wasn't convinced.

I ate all this yesterday and still lost a pound, along with walking around the high school where I subbed and walking about a mile inside Wal-mart and in the parking lot: