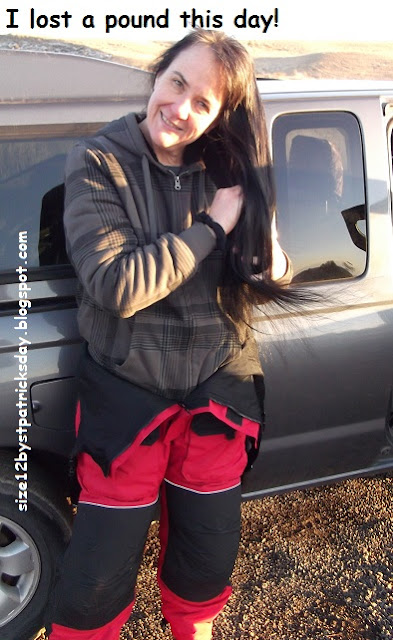 We practiced our shooting yesterday on milk jugs filled with water, out here in Bureau of Land Management territory. I hit a jug dead center on my first shot, and then missed on the whole rest of my clip. Scott took this picture of me as I was untangling my hair from all the head wear, even though it had been in a pony tail.

I walked up and down those hills I don't know how many times, carrying jugs of water half the time. After we were done shooting, we brought the dogs in there and collected brass bullet shells and aluminum cans for some recycling money. I wish I had worn my pedometer, but then again this was up and down hills, so it would not have done my exercise justice.

I wore my new red men's size medium snow pants because the wind was up and it was FREEZING! Not literally, but 48 degrees can feel like freezing when there is an icy wind. I have the red coat to match these red pants. Aren't they hot? They make me feel like a hockey player. They make my hips disappear, so when I'm all bundled up you can't even tell I'm a girl.

It felt warmer inside the canyon with the sun on us, downright comfy in fact. Shooting will be easier in summer when we don't need to bring all this cold weather gear.


Here is what I ate yesterday and lost a pound, along with walking all over these hills shooting and picking up brass:

Added months later: Here are links to some more days when I lost a pound or more on my diet:

Email ThisBlogThis!Share to TwitterShare to FacebookShare to Pinterest
Labels: lost a pound, picking up brass