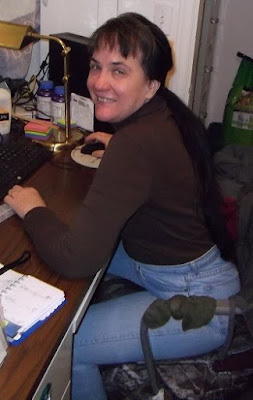 Scott and I went to a car auction in Idaho yesterday. I brought a lunch, but the breakfast burritos everyone was eating looked and smelled so good and were so cheap that I gave in and had one. The eggs and ham in them were no problem, but the tortilla, hash browns and cheese were -- along with the entire burrito being fried in lard! Yum, it was good, though!

And here is where I can actually see my lifestyle change, even from this cheating incident:

1) I craved a savory burrito instead of the sweet rolls, muffins and candy bars other people were eating. This is a major change for me. My sweet tooth is notorious in half a dozen California counties.

2) After this meal I ate a sensible dinner and only ended the day up .2 pounds. I didn't throw in the towel and say, "Oh well, the day is ruined, let's go wild!"

Scott took this picture of me day before yesterday. It is one of the less flattering photos taken of me lately. It shows my abdomen area, which needs to tighten up more than the rest of me does at this point.

Most of the time I hide my abdomen with a sweater, but I really don't want to have to do that all the time. Besides, I won't be able to in summer. Summers are over 100 even here in Spokane. I do have almost 13 more pounds to lose. Maybe losing those pounds will trim down my tummy all on its own.

We walked the dogs a mile in the park yesterday and then I walked all over Wal-Mart and Costco. I wore my pedometer to the stores, but not to the auto auction. I walked more than two miles yesterday. Here is what I ate: