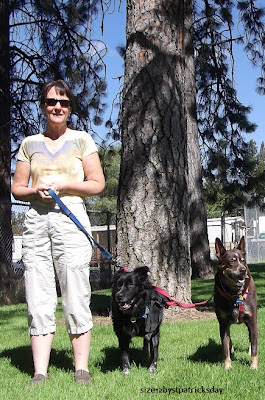 August 22 is mid summer, not fall! I know school starts for many in August now, but summer starts on summer solstice toward the end of June and continues for three months until the later days of Septemer.

The entire month of August is firmly in summer, despite what a local DJ said the other day about it now being early autumn. No, no, no, it is not!

Here in Spokane, though, you can already feel the air getting cooler. Late July was definitely hot, in the 90s every day and over 100 some days. August is not as hot, especially in the mornings when it can be in the 50s, but it still gets up into the 80s by each afternoon.

Let's not rush fall! It will be here soon enough.

I think this is a great shot of all three of us: Me, Oreo, and Raffle! It's from our walk this morning.

Email ThisBlogThis!Share to TwitterShare to FacebookShare to Pinterest
Labels: august is not fall, fall, Raffle Dog