I did a little gardening yesterday, with manual clippers. It felt kind of good to take my aggression out on these corn weeds. We call them that because last year, these Johnsongrass  weeds tricked us into letting them grow. We thought they were corn stalks.

To answer your question, "How fast does Johnson grass grow?" Ug, too fast! The huge leaves you see in this picture are only about two months' growth from dormant woody stalks.

We just rented this house last year. It has a second lot attached to it, and we had permission to plant corn there. It was just too good to be true that corn was already growing in this dog run behind the house. We are city people who had never grown corn before. We were fooled.

You can see clumps of woody Johnson Grass stalks sticking up amid the wreckage in the photo below. This shows that we were not the first residents this Johnsongrass fooled into letting it grow. They probably called it a corn weed too, after they figured out it was never going to grow ears of corn.

I know now that corn grows in single stalks, while Johnson Grass grows in clumps, and that is how you tell the difference between real corn and corn weeds. But even UC Davis says Johnsongrass seedlings look like corn. 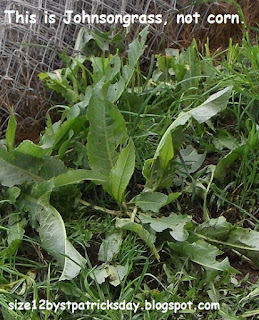 Update a few years later: I've completely rid us of this Johnson Grass by taking a spade to the plant while dormant in winter and cutting the root system over and over and then putting a turtle pool over where it used to grow. My theory is that cutting the roots stunted it and then preventing sunshine from getting there killed it.

This is gnarly hardy stuff, though, so you have to take a shovel to it multiple times. I placed the blade of the shovel in the middle of the woody winter clump, put my foot on it, and threw all my weight down into the root system, then dug out what I had cut off and burned that.
Posted by Cherise Kelley