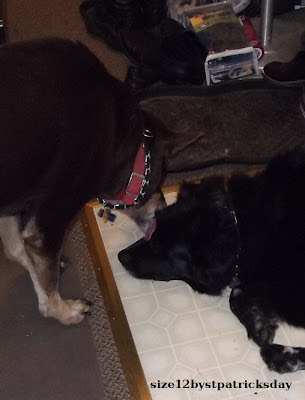 Both our dogs are neutered males. We humans are the alpha male and female in our family. Both dogs are helpers in our pack. We rescued the brown dog on the left from the pound first.

When we got the black dog on the right from the pound, I thought he was a puppy. He didn't have any rear teeth. Later, I found out he was just a bird dog, bred not to grow any rear teeth.

Also, the brown dog was far past teething when the black dog joined our pack. So, the brown dog started grooming his teething toys! He would carry them around in his mouth, set them down, and give them baths.

My sister has a coffee table book on wolf behavior that explains dog pack behavior. The alpha female in the  pack picks one of the helper wolves in the pack to be her nanny and raise her pups for her. The nanny can be a male or a female. My poor dog is preparing himself for when I have pups for him to raise. He will be preparing forever.

I gained .4 pounds yesterday because I ate like a pig! I substitute taught in single survival class, and they got to eat the chicken pot pies they made earlier in the week. The pies were good, and I ate about half of one all by myself! I walked with the walking class for 30 minutes and later with my dogs in the park half a mile. Here is everything I ate yesterday: